“Amazing” is the word most associated with Rob’s paintings as it is commonly quoted among his clients. Jackson’s love for sports began at the age of seven, after watching the late Chicago Bears Hall of Fame running back, Walter Payton, break Jim Brown’s rushing record. As a talented young artist, it seemed only natural that he would combine his artistic gift with his athletic obsession. Encouraged by another artist as a teenager, Rob developed a passion for the realism genre of art. Soon after, his work was hanging along side that of Stephen Holland, Opie Otterstad and Vernon Wells. He has since painted live at events such as Super Bowl Week and teamed up with numerous foundations to help raise money for charity.

Known for his crisp detail and ability to capture the likeness of his subject with ease, Rob strives to achieve a texture within his work that takes his subject matter close to an exact resemblance of a photo without losing the fine art feel of an original painting. Unlike most artists who have followed the path of being formally trained, Rob prides himself on being able to accomplish his style as a natural, hard working, self-taught artist.

After first marketing himself directly to professional athletes in 2006, his original paintings have been on display in galleries across the country, featured on NBC, and used to decorate his corporate clients suites in professional stadiums. Jackson has painted for some of today’s biggest names, on and off the field, including top 10 draft picks, Super Bowl champs, All-Pros and Olympic Gold Medalists such as DeMarcus Ware, Greg Jennings, Vince Wilfork, Ron Jaworski, Jennie Finch and Beckett Media. 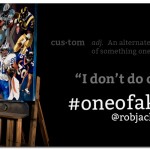 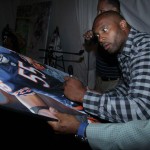 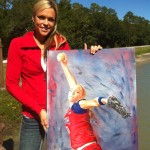 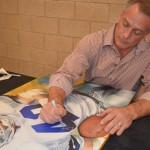