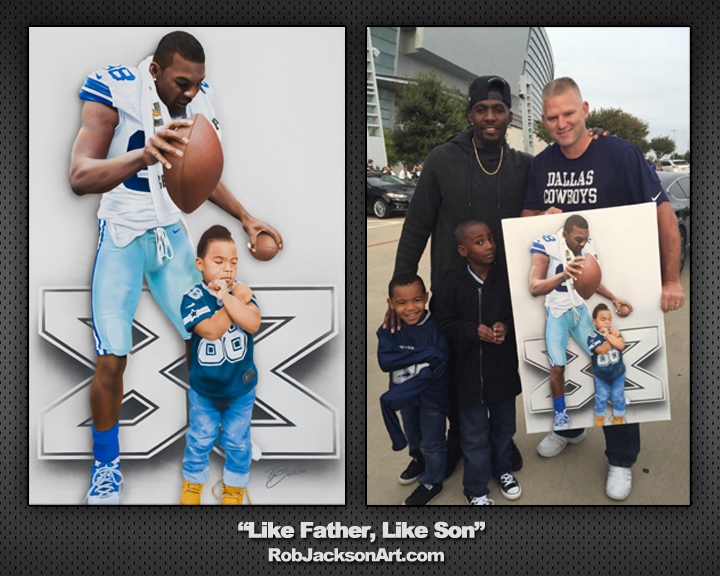 I don’t make a habit of giving away my paintings. This project however came with special circumstances. Football and Art are what make up my business but they also make up who I am as a person. If I wasn’t a fan of the game I wouldn’t paint it. This year marks my 25th year of being a Dallas Cowboys fan. If you know me well, then you know I haven’t missed seeing a game since 1998 while I was on tour in Kuwait. The organization has brought me so much entertainment over the last quarter century and because of that, I wanted to do something impact-full for an impact-full player. How better to do that than to create a one of a kind painting that they would cherish forever. The way to do that isn’t to paint them in action but rather to focus on family. I came across this image of Dez while researching others for a separate project and that’s when it clicked that I could give him something special. I made contact with those close to him and set a date that happened to coincide with his 26th birthday. In my work, I deal with some high profile individuals and it’s very seldom that I get that star struck feeling. However, being escorted by security passed a large crowd of Cowboys fans who had gathered to see the players exit was a pretty cool rush of adrenaline. While waiting for Dez to arrive I’m pointing out the players to my daughter who adores them. Affording her early childhood memories like that are priceless and a major part of why I do what I do. The time spent there with his family, watching our kids play keep away with the football, made the experience more enjoyable than I could have imagined. As Dez approached, I could tell he wanted to be there and wasn’t the least bit skeptical of my presence. After giving a quick run down of my clients and events I’ve been a part of, I opened up the box to present his painting. My only regret is that I wasn’t rolling video on his reaction. His smile said it all. He turned and gave me a giant hug saying he loved the painting. I knew that I’d done what I set out to do. I had made that impact on someone who’s made one on me. I don’t often get to witness the reactions or be a part of the deliveries when someone receives my work as most of it has to be shipped to my clients. To see first hand how appreciative someone can be not only inspires me but also tells me I’m using my gift the way it’s inteneded. I’m constantly asked by fans, “Who’s the nicest Cowboy you ever met?” Today, I’d tell you it’s Dez Bryant. Happy Birthday Dez.