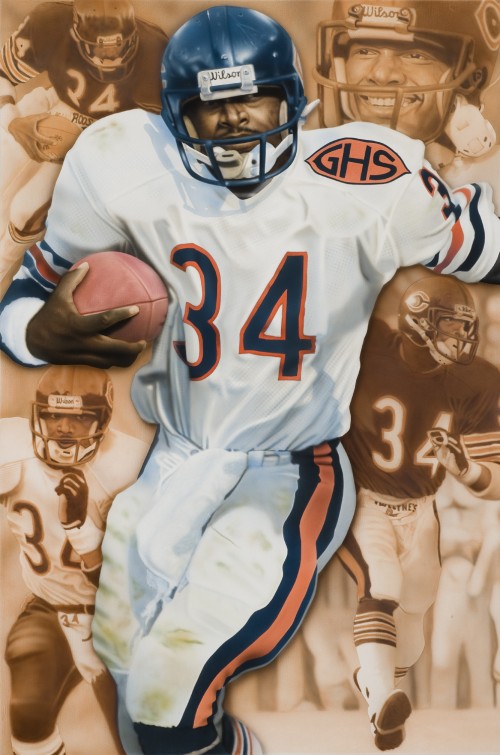 Being blessed with a creative gift made becoming an artist an easy decision. Deciding what to create was even easier. Since the age of seven, football has been my passion. If I wasn’t watching it or playing it, I was painting it. I owe all of the enjoyment I’ve had from football to former Chicago Bears running back Walter Payton. On October 7th 1984, I sat down and watched my first football game from start to finish. I had no idea what was going to happen or the importance of that game to so many people. Payton surpassed Jim Brown that day to become the NFL’s all-time leading rusher. For me, as a kid, to see a game stop down in order to celebrate Walter’s accomplishment welcomed me into football fandom in a huge way. I can still vividly see the image in my head of Walter and Todd Bell with an iconic high-five near mid field. I remember the New Orleans Saints players congratulating him after the play and the media members rushing the field with their cameras. Today it seems like you can see a player keeping a ball after an accomplishment each week. On that day though, I was unaware of the magnitude of the moment but knew it had to be something special when Walter walked toward the bench with the ball in hand. I immediately fell in love with the sport and have never looked back.

Walter Payton, in that moment, is responsible for all of the satisfying Sunday’s I’ve had when my team has won, to the exhilaration of making a play on the field during school, to being paid to paint the game I love, and for all of the wonderful friends in my life that have been created through a shared passion for football. Years later, I was lucky enough to be in attendance at Texas Stadium to see Emmitt Smith break Payton’s rushing record. Growing up in North Texas, I’m naturally a Dallas Cowboys fan and was as happy as I could be for Emmitt and his accomplishment. However, what really made that moment special for me personally was witnessing a part of Walter Payton’s legacy first hand.

Last December the Deacon Jones Foundation contacted me about signing on with them to create paintings that will help to make a difference in the lives of inner city kids. The paintings being created for the Deacon Jones Foundation are Officially Licensed by the NFL. Being able to say that my work is a licensed NFL product is something I’ve worked toward and dreamt about for years. It was important to me that the very first painting I create as an Officially Licensed NFL product be of the man who is responsible for leading me to this point in my life. In the spirit of Walter Payton’s NFL Man of the Year Award, I will continue to paint NFL athletes with the hope that what I create will not only help others re-live their memories, but also assist in giving back to those in need through charitable endeavours. With this painting of Walter, my career has now come full circle.